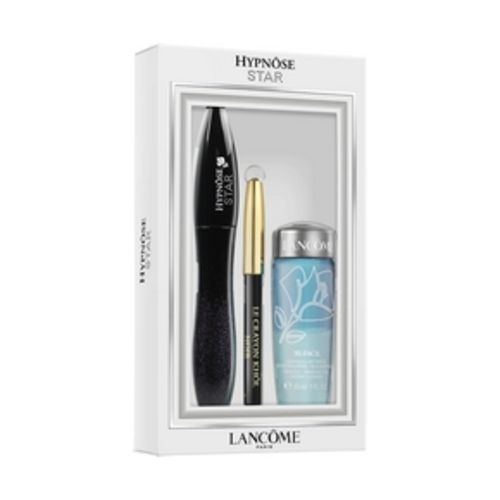 Buy the Lancôme Hypnôse Star Box at a low price on Fragrenza Perfumes.

For a true cinema look, Lancôme lifts the veil on the secret of an ultra-glamorous eyelash fringe: the meeting of a double-sided brush and a fluid formula with a “Black Diamond” effect, allowing the lashes to be sculpted. Lashes take on intense volume at the root and curl dramatically lengthwise. Never overloaded.

Lancôme reveals the secret of the cinema gaze! Innovation – Haute Volupté Brush – 3 patents filed: A true concentrate of sensuality, its faceted brush sets lashes ablaze to multiply their volume, and give them a Hollywood arch. Rounded faces: lengthen and separate the eyelashes while giving them a Hollywood arch. Flat Faces: Generously coat lashes for sensational volume.

Innovation – Reversing Formula: Hypnôse Star, thanks to its fluid formula “Black Diamond” effect, sculpts a fringe of long, black and shiny eyelashes for a star gaze! Black diamond eyelashes: Thanks to mineral pigments bathed in reflective oils. Hollywoodian arch: Thanks to the fixing Carnauba wax which is distributed in a thin film over the entire surface of the eyelashes.

Find it at the best price at our Make-up partner: Hypnôse Star – Fragrenza Perfumes as well as all the other products of the Lancôme brand .

Reminiscence and its fragrance Patchouli L’Eau

Aqua Di Gioia, an emotion on the border between land and sea